Banque Havilland is pleased to announce its support for the British and Irish Film Festival Luxembourg, as the festival celebrates its 10th anniversary.

With a new name and logo — to include the seminars and workshops also organised around the event –, the festival continues to provide a unique opportunity for viewers to experience a wide selection of new films from Britain and Ireland. The ten-day event will screen 16 feature-length films, from a cross-section of genres and representing mainly independent cinema, as well as a shorts programme. To mark the festival’s 10th edition, many treats and surprises have been prepared, including a celebratory cake and a new “Ciné Cuisine” event.

Once again this year, the audience will have the privilege of meeting actors, directors and producers at a number of the events, including intimate Q&A sessions post-screenings.

The festival is again under the patronage of the British Embassy and the Embassy of Ireland in Luxembourg.

For more detailed information on the programme, please visit www.bifilmseason.lu. 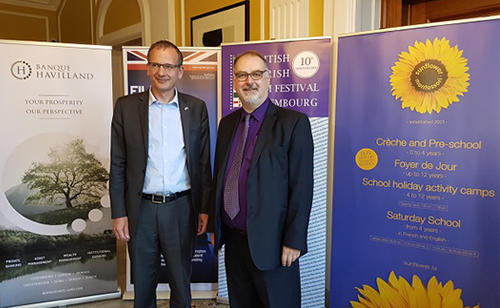